Where are The Analytics Officers From?

September 10, 2017
In this big data era, many people, with or without analytics background, are trying to get on the analytics train. When planning the career to eventually become the analytics officer, we should first know the paths those analytics officers have gone through. In this post, I will discuss three typical tracks.


The most straightforward path is to graduate from a relevant degree program, and start the career as an analyst, then move to a manager, director, and all the way up to CAO. (In a later post, I will discuss the degree programs that produce data scientists for the industry.) The career growth along this track indicates managing analysts and analytics managers, and increased responsibilities within and then beyond one business unit.

Another common path is to move from a mainstream business position to its analytics counterpart, and then move up along the analytics track. In a previous post, I elaborated the career path of a salesman at TSM. At any point of this progression, the salesman may redirect his sales career to analytics. For instance, at the regional sales manager position, Bob has excelled in the job and set a great example for the other regions by using analytics to extract insights from the past successful and failed deals, to set goals and incentives for the individual account managers, and to approve proper discounts during negotiations. When the country manager decides to push such best practices to the other regions throughout the country, Bob may very well lead the charge of establishing that analytics team. In this case, Bob becomes the analytics officer of the country.

A nontrivial path is to move from other business support functions to an analytics position, and then move up through the analytics track. For instance, a recruiter Amy has done a great job by using analytics to find out where to solicit job ads, to identify potential candidates, and to attract them to the company. When the CAO of TSM has an opening for analyst, Amy can take an internal transfer offer and apply her analytics skills to other divisions of the company.

Continue reading Where are The Analytics Officer Going?

I had my first job interview in Fall 2007. That interview completely changed my career trajectory. Before that, I was a graduate student quitting a PhD program. After that, I joined the energy sector and started working on numerous forecasting projects. In this blog series, I will discuss that interview (in this post) and share the lessons learned (in the following two posts). Hopefully these tips are useful to the folks interviewing for their first jobs in data science and the hiring managers trying to find their entry level data scientists. It was a lunch interview with my future boss Richard, co-founder of a startup consulting company. Richard got the IEEE Fellow award in his mid-thirties, maybe the youngest IEEE Fellow at that time.  The restaurant served Japanese and Thai food. The interview began after we placed the order.  He started with the introduction of the company, which was probably the most tech-savvy firm in the utility industry at the time. The comp

Career Paths of The Analytics Officers

We human beings subconsciously and sometimes consciously ask ourselves: where am I, where am I from, and where am I going? The answers characterize the path we are on. Since the aim of this blog is to push the analytics people up the career ladders, I'm going to start with a discussion about the career paths of the analytics officers. In the next three posts, I will answer the following three questions about the analytics officers: Where are they? Where are they from? Where are they going? I'll use The Sales Masters (TSM, a company I just made up) as an example. The C-Suite of TSM has all the seats one can think of, including Chief Executive Officer, Chief Operations Officer, Chief Technology Officer, Chief Marketing Officer, Chief Finance Officer, and so forth. The organization chart of TSM is shown below: Org Chart of TSM TSM's core business is sales, which is under COO's belt in our TSM example. A typical sales career progresses with growing territory a 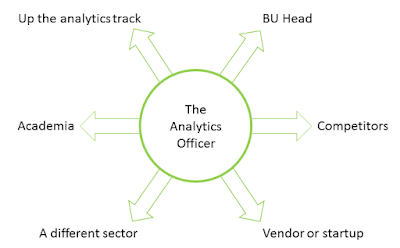 Where are The Analytics Officers Going?